As 2010 comes to a close, we take a look back at the year's biggest moments in country music. With all that has occurred in the past 11 months -- engagements, weddings, divorces, babies, awards, new albums, historic floods, sold-out shows and more -- it was a difficult task to narrow the events down to just 10. See if you agree with The Boot's 2010 Top 10 Moments in Country Music, and let us know if you have any of your own favorite 2010 musical memories. 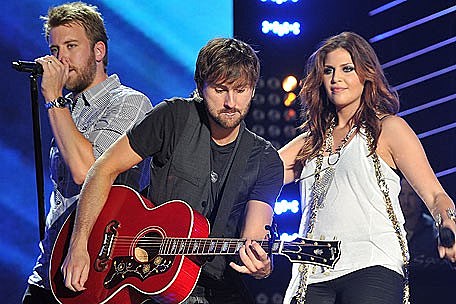 Frederick Breedon, Getty Images
Over the past year, Lady Antebellum have picked up a handful of awards for their explosively successful 2010. The trio has added two CMA trophies, three ACM Awards, four ACA Awards, their first American Music Award and a Grammy Award. For the first half of the year, Lady A dominated the Billboard country album chart with 'Need You Now,' and they also set a record of 10 weeks on the Adult Contemporary chart with the title track. It became the longest-running No. 1 song by a country group since Billboard started the chart nearly 50 years ago.
9. Jimmy Wayne's 1,700-Mile Walk 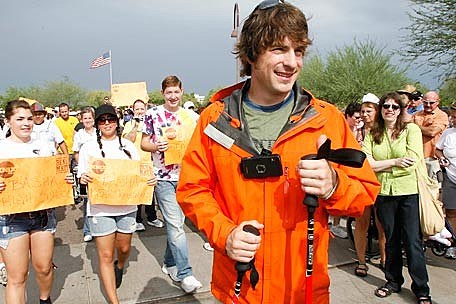 Ralph Fresco, AP
Jimmy Wayne kicked off his 1,700-mile Meet Me Halfway walk on New Year's Day in Nashville, Tenn., braving adverse conditions to help raise awareness and funds for at-risk youths who age out of the foster care system. He completed the six-state, seven-month trek in Phoenix, Ariz., on Aug. 1, walking the last five miles with a shattered right foot. Jimmy, who was once homeless himself as a teen, decided to make the journey after meeting an 18-year-old boy who was about to leave a teen facility and had nowhere to go.
8. D-I-V-O-R-C-E Court 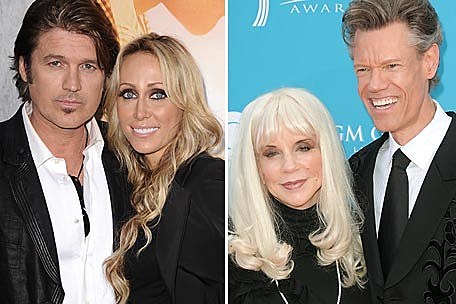 WireImage (2)
Country music fans and the industry alike were shocked when not one, not two, but three country music marriages fell apart this year. Billy Ray Cyrus filed from his wife, Tish, on Tuesday, Oct. 26, citing irreconcilable differences. He and Tish were married for 17 years, one year after having Destiny Hope, otherwise known as teen sensation Miley Cyrus.

Just two days later, Randy Travis and his manager-wife, Lib Hatcher, filed a petition for dissolution of marriage, and the divorce was finalized Oct. 29. Their relationship began 34 years ago when Randy was just 17 years old, and the two tied the knot in 1991, 12 years after their initial meeting.

Montgomery Gentry's Eddie Montgomery will be single soon, as well, as wife Tracy filed for divorce in November. 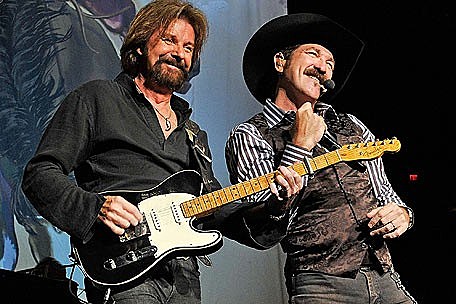 Frederick Breedon, WireImage
The date of September 2, 2010 will go down in country music history books as the last time Kix Brooks and Ronnie Dunn took to the stage as Brooks & Dunn. The pair, who released their debut album, 'Brand New Man,' in 1991, announced they were going their separate ways last year but allowed their fans enough time to adjust to the news when they revealed plans for their Last Rodeo Tour. The most-awarded duo in country history fittingly bid a fond farewell to their 20-year partnership with a benefit concert in their hometown of Nashville.
6. Brad Paisley Is an Emotional Entertainer 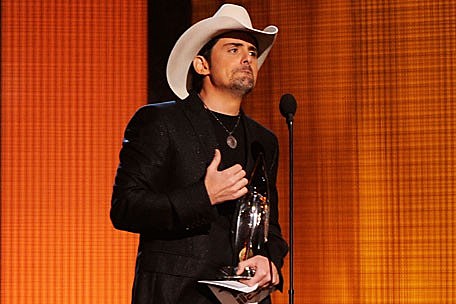 Frederick Breedon, FilmMagic
Brad Paisley had been nominated for the CMA Awards' top prize six times before finally being announced as the new Entertainer of the Year in November. In a very moving and visibly emotional acceptance speech, the father of two gave props to his friend and mentor Little Jimmy Dickens, the grandfather who gave him his first guitar, his wife and, most important, country music fans. One of the main factors in determining an Entertainer of the Year winner is how well they entertain the audience in concert. Brad's highly successful H2O tour launched just a few days after the tragic Nashville floods, which took out nearly three-quarters of his instruments, stage equipment and gear.
5. Carrie Underwood's Fairytale Wedding 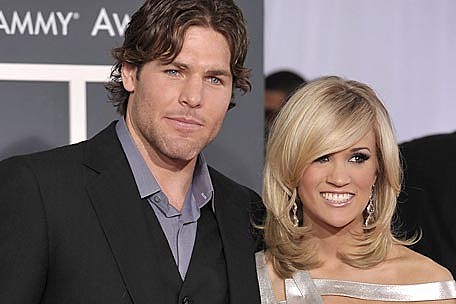 John Shearer, WireImage
One of country music's hottest females was taken off the market when Carrie Underwood and professional hockey player Mike Fisher said "I do" during an intimate ceremony in Greensboro, Ga., on July 10. Prior to their engagement last December, Carrie told The Boot, "He brings out the best in me." The two are going to savor married life for a while before they decide to bring a baby into their midst. Mike also appears in the video for Carrie's latest single, 'Mama's Song,' as the real-life man who sweeps her off her feet.
4. Taylor's Grammy Sweep & 'Speak Now' 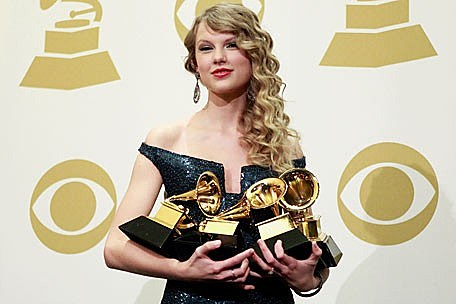 Michael Tran, FilmMagic
Last year, we would not have thought young Taylor Swift could get even more popular or earn as many accolades as she did ... and we could not have been more wrong. The singer-songwriter swept this year's Grammy Awards, taking home four trophies, including the overall Album of the Year for 'Fearless,' becoming the youngest artist to ever win the award at the age of 20. The multi-talented entertainer also starred in her first film, 'Valentine's Day,' not to mention she wrote every song by herself on her new album, 'Speak Now,' which debuted at the top of the Billboard Album chart, selling more than 1,047,000 copies during its first week alone.
3. Country's New Power Couple 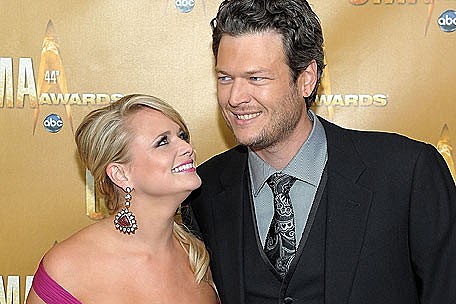 Michael Loccisano, WireImage
The two newly crowned CMA Male and Female Vocalists have had quite the break-out year. Blake Shelton earned himself a trip to the top of the country singles charts twice, released three albums and became a member of the Grand Ole Opry, a distinction he thought was out of his reach. Miranda Lambert has also had a whirlwind year, launching her first headlining tour, taking home three CMA Awards and getting engaged to the man she says "is the one, without a doubt."

The couple have been together for five years, and on May 9, Blake finally popped the question everybody had been asking the pair about for quite some time. They plan on getting married next spring. 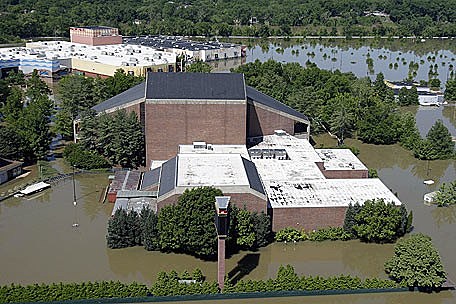 On May 1 and 2, storms ripped through Middle Tennessee, causing death and destruction with every raindrop that flooded Nashville and the surrounding areas, recording more than 13 inches of rain. Hundreds of people were rescued by boat and thousands were displaced from their homes. Hundreds of businesses were also flooded, including the Grand Ole Opry, Opryland Hotel and Soundcheck, a rehearsal facility housing musical instruments and stage gear of numerous artists and musicians, including Brad Paisley, Keith Urban and Vince Gill, who lost most all of their precious guitar collections and tour sets. Several more artists, such as Kenny Chesney, Dierks Bentley, Jo Dee Messina and Julie Roberts, were battling the flood waters in their own homes.
1. Recovery and Rebirth 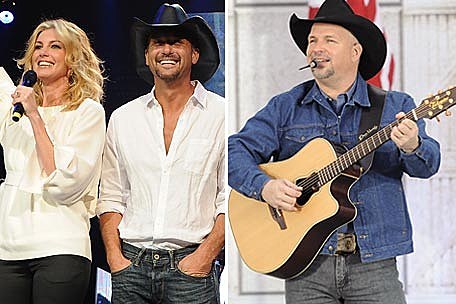 Getty Images I WireImage
Shortly after the Nashville floods, country artists rallied together at numerous benefits to help raise funds and spirits for the victims affected by the storm. To kick off the fundraising efforts, Vince Gill hosted a three-and-a-half hour telethon on Nashville's ABC-TV affiliate, WKRN, less than a week after the flood. The event, which also featured performances by Keith, Darius Rucker and Lorrie Morgan, raised more than $1.7 million.

GAC-TV took to the Ryman Auditorium stage to host the Music City: Keep On Playin' flood-relief benefit on May 16. Brad Paisley, Keith Urban, Sheryl Crow, Lady Antebellum and Dierks Bentley took to the stage and some even to the phones for the telethon, which also featured Keith's wife, Nicole Kidman, taking pledges to the tune of nearly $2 million.

The CMA donated nearly $3 million to help victims of the flood. The funds came from proceeds procured from this year's CMA Music Festival.

Garth Brooks, along with his wife, Trisha Yearwood, will play nine sold-out shows at Nashville's Bridgestone Arena beginning Dec. 16. What started out as one benefit concert exploded into nine after tickets were in such high demand. All proceeds will assist victims who were impacted by May's tragic floods, which caused more than $2 billion in damages in Nashville alone.