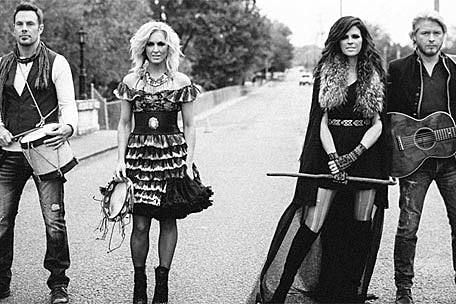 Little Big Town jumped out of the boat and into the storm with their latest single, "Tornado," and the fiery tune about a woman's fury turning a house upside down is definitely causing a stir among the band's fans, who seem to be loving the song just as much as they loved the chart-topping, CMA-winning "Pontoon." LBT's Karen Fairchild says she's noticed that young female fans are latching onto the Top 10 hit in a big way, which she has seen both on and off the stage.

"It feels fantastic to have another song in the Top 10," Karen tells The Boot. "And I love watching the fans talk about 'Tornado' on Twitter and Facebook like we did on 'Pontoon' – they love "Tornado" too, and they like identifying with that song when they're ticked off! They want to throw their man under a house! I see the girls tweet things like, 'I'm a tornado!' Or ... 'I'm gonna lift this house,' and you just know there's something not good going on in their house that day, and they need a theme song and something they can identify with and live vicariously through what we're singing. That's what it's all about, how you're feeling and looking for a moment to identify with in a song. And it's fun ...we don't take it too seriously. But we all feel like a tornado sometimes."

Apparently even Karen has her tornadic-type moments on occasion, which she channels amazingly well in her spirited performance in the song's video. Her hubby Jimi Westbrook admits that in this case, art definitely imitates life, since his wife can sometimes be a tad intense just like in the video!

"Oh yeah, she scares me every day," Jimi tells The Boot with a laugh. "But I thought it was amazing – she's so good in that video!"

"I'll speak for Jimi," adds LBT's Philip Sweet. "It scares him, and he likes it, all at the same time! [laughs]"

Karen cops to relishing one particular moment in the video; she even kept a little souvenir from that point in the shoot which she's hanging onto for posterity or whenever she needs to feel special.

"I did keep the scepter as a little memento ... it felt good to carry that in that video!" she admits.

In that princess-like spirit, The Boot asked Karen if there's anyone she hopes to bump into at the upcoming Grammy Awards, where Little Big Town is nominated for Best Country Duo/Group Performance for "Pontoon" -- their fifth career nomination.

"Rihanna is the one to watch a lot of times, because she's super fashion-forward and risky, and it's sexy but also she'll surprise you and wear something really feminine and beautiful, so I always love to see what she's going to do. I don't know if she's gonna wear a swan dress like Bjork, but it'll be fun if she shows up."