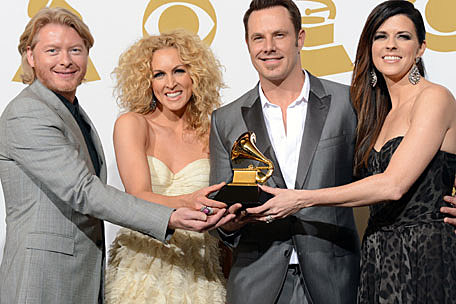 The fifth time is a charm for Little Big Town, who won their first Grammy during Sunday's pre-telecast ceremony. The foursome, who have five career Grammy nods, took home the Best Country Duo/Group Performance honors for their No. 1 hit, "Pontoon."

"Woo-hoo!" shouted the band's Kimberly Schlapman. "We wanted one of these for so long!"

"This is such a long time coming for us," added bandmate Phillip Sweet. "We're so thrilled!"

This year, they best the Eli Young Band, Taylor Swift and the Civil Wars, the Time Jumpers and Don Williams and Alison Krauss. "Pontoon" was also the winner of Single of the Year at November's CMA Awards.