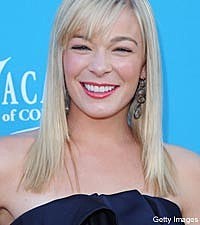 LeAnn Rimes will be joined by some of today's biggest stars as she celebrates Independence Day this year. Participating in Macy's annual 4th of July Fireworks Spectacular, LeAnn will perform with an all-star cast for a special concert that will air live on NBC.

The show, which will be hosted by Nick Cannon of 'America's Got Talent' and Alison Sweeney from 'The Biggest Loser,' will include performances by Justin Bieber and Enrique Iglesias, as well as an appearance from the cast of 'Twilight Saga: Eclipse,' who will be taped while aboard the ship Norwegian EPIC, the boat that was originally christened by Reba McEntire.

Other country stars participating in July 4th festivities this year include Trace Adkins, who will headline the 'Music City July 4th: Let Freedom Sing!' celebration, while Willie Nelson will once again host his annual 4th of July star-studded concert, dubbed the 'Backyard Summer Picnic.' Reba and Darius Rucker will spend the day in Washington, DC, where they will perform at 'A Capitol Fourth,' held on the West Lawn of the US Capitol, and Charlie Daniels will play host to America's Opry Weekend 'Star-Spangled Special.'

LeAnn's first single off her upcoming CD, 'Lady and Gentlemen,' a remake of the John Anderson classic, 'Swingin,' is currently climbing the charts. The CD, produced by Vince Gill, is expected to hit shelves this fall.

Macy's 4th of July Fireworks Spectacular will air live on July 4 on NBC at 8:00 CST.