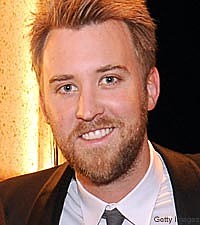 Lady Antebellum's Charles Kelley is certainly proud of the songs he writes, but he recently revealed that the band's biggest hit, 'Need You Now,' might not have become a hit at all if it had been up to him. He recalls that he was hesitant to even play the song for the trio's record label, Capitol Nashville, when they were deciding what tracks to put on their sophomore album. Luckily, he changed his mind.

"This is something that Capitol can hold over our head forever, because we came in there and we showed them all of these songs," Charles tells golfer David Feherty in the upcoming CBS TV Special, 'Golf Magazine Presents David Feherty's American Journey.' "And I said, 'Well, I've got a couple of other ones, too. I don't think that you're going to think they're that great, but it's worth showing you.' And it was just a little acoustic guitar thing, and everybody's ears perked up, and the engineer came on and they said, 'You need to give that one a shot.' So sure enough we did, and it is our biggest single to date. So we recognize that we don't know everything!"

Charles also shares stories with Feherty about growing up in Augusta, his love of golf, and his history with the Masters. "I'm always inside these venues and the tour bus. To get out in nature a little bit and play, and curse at the golf course a little bit and release a little anger, it's good for you. I used to work at the Masters. I was a range boy for a couple of years, and I used to go every year as much as I could. I haven't been in the past couple of years with the touring schedule, but I watch it every year on TV if I'm not there. [I have] a lot of fond memories."