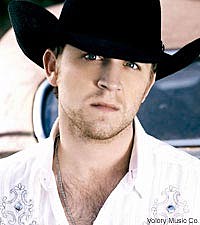 Condolences go out to Justin Moore, who not only lost his grandfather, Tom 'PawPaw' Moore, last week, but late Sunday night (Nov. 29) his Aunt Glenda lost her six year battle with cancer. Justin's grandfather, who was retired from the Navy, was diagnosed six months ago with cancer and was 72 years old. His aunt was in her early 50s.

The Poyen, Ark. native was very close to both his grandfather and his aunt. His spokesperson tells The Boot that they were two of the most important people in his life. Glenda, who was his mother's sister, was like a second mother to him, while Justin's grandfather taught the singer to hunt and fish, and had him in a deer stand when he was just two years old. Justin tweeted on Monday, "Thanks for all the thoughts and prayers," and we were told he's "going to miss them more than you can imagine."

Justin canceled a couple of dates to be with his family, including a show in Phoenix, Ariz. on Wednesday, Dec. 2 . He added on his Twitter page, "Sorry to y'all out west for the cancellations. We'll make it up to you, but my family needs me. My fans are the best in the world."

Justin's next date is in Columbia, Mo. on Thursday, Dec. 10.