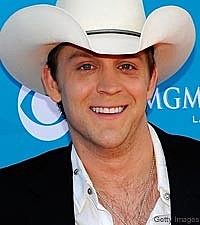 Justin Moore has just released his fourth single, 'How I Got to Be This Way,' from his self-titled debut album, but he's already hard at work on his followup record. "We have quite a few things done," Justin tells The Boot. "I actually think we have all of the songs picked. I've written about 20 to 25 new songs, and I've been in Nashville for seven or eight years writing, so I've got a whole slew of songs that didn't make the first record. I'm excited about it!"

Justin says that fans of his first album -- which spawned the No. 1 hit 'Small Town U.S.A.' and the Top 10 single, 'Backwoods' -- will definitely enjoy what's to come. "It's going to be the same type of album, but it shows a little bit of growth as a songwriter and as a person," he explains. "It's definitely going to be the same kind of uptempo, roll down the windows, crank it up album with the same kind of theme running through it."

When it comes to his songwriting, Justin's sound and style has remained true to who he is as an artist, even after experiencing the birth of his daughter, Ella Kole, in February. "I'm never going to be one of those guys who goes out and changes what I do. My music is specific to one thing, for the most part. I do what I do, but [being a father] changes you as a person. If you're a different person then you're going to write a little bit different. It's changed my writing a little bit, but I'm still going to make Justin Moore albums. That's just what I do, and it's what my fans want."

Justin is gearing up to shoot the music video for 'How I Got to Be This Way' in a live concert setting this summer while opening for Brad Paisley on the H2O tour. "A lot of people have seen us live, but a lot of people haven't yet," Justin notes. "I just go up there and try to have a good time. That's infectious. If people can tell you're having a good time onstage, they can't help but have a good time. My live show has been one of the big things in my career that's helped me get to where I'm at now. We'll also throw in some old baby pictures of me [in the video], so it will be pretty cool and pretty original."

Justin's sophomore album is due for release next year.