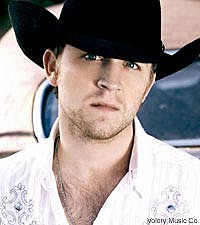 "If you grow up like I grew up, this was unattainable," Poyen, Arkansas native Justin Moore tells The Boot. "You were crazy for dreaming that big!"

Well, call him crazy. Justin has already seen his debut album become one of the Top 5 most downloaded country albums on iTunes -- and it's only been out for one day! The self-titled disc includes his debut single, 'Back That Thing Up,' and current Top 10 single, 'Small Town USA' -- the song that paints a picture of his own upbringing.

"I grew up in one of those towns where nothing mattered but baseball on Friday night, church and family," he tells us. "I always loved that. I was never one of those kids that wanted to get the heck out of Dodge. I always wanted to stay there, and I'd love to move back one day."

Justin wrote nine of the album's ten tracks. He says he moved to Nashville to be a singer but then discovered his songwriting talents almost by default. While looking for great songs to cut, Justin found that Nashville songwriters didn't want to give their best material to an unknown "redneck from Arkansas," so he had to create that material himself.

"When I started writing songs, I went from somebody who could sing, to an artist," he says. "Until that time, I halfway had a vision of what I wanted to do, but not completely."

Justin is now on his 'Small Town USA' whistle stop tour, which started Tuesday in his hometown and will continue through small cities in Arkansas, Kentucky, Indiana, Michigan and North Carolina. He'll be doing acoustic shows in Wal-Mart stores and visiting local radio stations, in cities similar to the place the budding star calls home.

"This was all I ever wanted to do, and I wouldn't be happy anywhere if I wasn't doing this," says Justin. "I will move home one day and it will all be worth it."