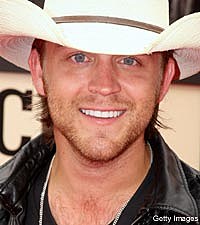 Justin Moore and his wife Kate are still getting used to being parents. The couple's first child, Ella Kole, was born in February, and one month into fatherhood, Justin realizes things have completely turned around for him.

"I've been joking that I used to come home to get rest," says the singer, "but now I get rest when I head out on the road! Seriously though, everything is going great. But I feel kinda bad because my wife takes the brunt of the responsibility since I've been gone so much on tour."

When Justin is home with his wife and baby, he says he realizes just how much change having a child has brought into their lives. However, he hasn't lost his sense of humor about what the future may bring.

"It's amazing how immediately your perspective on life changes," he says, "I was laying in bed the other night with her, realizing how tiny she still is. But my grandma said something once that was pretty funny: 'you can't expect a poodle and a pekingese to have a Great Dane!' Both my wife and I are pretty small people, so she doesn't have a prayer. She'll probably be tiny her whole life!"

Justin's current single, 'Backwoods,' is in the Top 15 and climbing the charts.