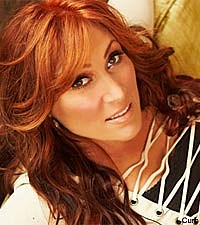 Jo Dee Messina is speaking out about the reasons for her five year respite from the spotlight following her 2005 album, 'Delicious Surprise.' The singer places most of the blame for her absence from country radio on her record label, Curb Records, because of its executives' refusal to release any of her new music. But Jo Dee has made peace with her unexpected break, thanks to what she says was divine intervention.

"I was frustrated and really down, but when you feel like God's looking the other way, that's when He shows you that He's right here," she tells The Daily Times. "It was in the middle of July, and we were out west when I looked over and saw these beautiful snow-capped mountains. We stopped and I got out, and I was in shorts and a tank top, and it was just so beautiful. That kind of beauty is just overwhelming at times."

That moment became the inspiration for her current single, 'That's God.' "The song itself is just such a blessing that I thank God for," she explains. "Ultimately, the purpose [for the album delay] was to just get this message out and sing this song."

Still, Jo Dee acknowledges that the past five years have been a painful challenge. Her new album, 'Unmistakable,' was first scheduled to be released in August of 2007, but faced one setback after another. "We were going back and forth with attorneys, and it was such a hopeless time. I was running out of money fighting these battles, and it was just to get my music heard. It was heartbreaking. I had been telling promoters, 'It's coming out this year, it's coming out next year,' and the promoters were like, 'OK, let's talk after it comes out.' These were people I'd been in business with for years, so I felt bad. It was such a sad time; just a real downer."

More than making her sad, it made the fiery redhead angry -- and ready to fight. "It's just ridiculous," she insists. "It's affecting my ability to make a living, and that's illegal in any other business, by the way. If you look at my records, they're so far apart, it's been hard to gain momentum each time. I feel really discouraged sometimes, because so many fans are out there who want to hear it, and that's all that I want."

While Jo Dee acknowledges that her new single would never have happened if her album had been released on time, she says it's still a difficult memory for her. After battling alcoholism and financial woes earlier in her career, including losing both her home and car at one point, this obstacle felt like it was more than she could handle.

"I felt really defeated," she acknowledges, "and I just needed to get away and take a break from the insanity."

Back on the road with her Music Room Series tour, Jo Dee is finally bringing fans the music they've been waiting for. She's also releasing three separate EPs over the course of the year, including a few live acoustic tracks on each one. The first nine-song CD will be available April 27.