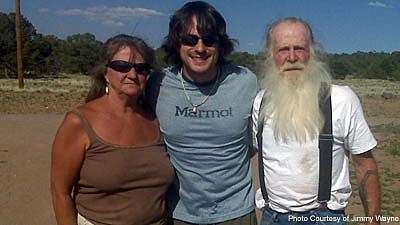 Over the past few weeks, the residents of Pie Town, N.M. were buzzing about the fact that Jimmy Buffett would be walking through their little town in a matter of days. There was only one small problem: they were talking about the wrong Jimmy.

Jimmy Wayne, who has been walking across America to raise awareness for teen homelessness, passed through Pie Town in late June in the midst of his Meet Me Halfway campaign. One morning, the singer stopped in at the Pie-O-Neer Cafe off Highway 60 to grab a cup of coffee and was caught a little off guard with the welcoming he received.

"I introduced myself to the pie baker and the waitress, and I got this curious look in response," Jimmy tells The Boot. "The baker said, 'I thought Jimmy Buffett was walking through Pie Town. I made a Margaritaville Pie especially for him and wanted him to tell me what he thought.'"

As Jimmy thought of ways to break the ice, the baker continued on and on about her love for Jimmy Buffett. "I sat there perched on the stool like a crow, sipping my coffee," Jimmy laughs. "She steered around that cafe showing off her pies while talking about Jimmy Buffett. She even stopped to peel a few peaches; still talking about Jimmy. Needless to say, Jimmy Buffett was performing in the Gulf [of Mexico] to raise awareness for the oil spilled beaches."

It didn't take long, however, for Jimmy Wayne to feel right at home in Pie Town. "Pie Town is as small as the word 'pie,' and that's a compliment," Jimmy says. "I love small, all-American towns. I guess this is where the phrase 'American Pie' came from. If it wasn't, It should have been. There are windmills, old tractors, farm houses and, of course, Pie-O-Neer Cafe. It was the neatest cafe, and they had some of the best pie I've ever eaten.

"There was a pot belly wood stove that sat in the middle of the room, and what I refer to as 'gypsy door beads' hung over one doorway. There were many black and white pictures hanging on the walls, and locals who were characters themselves. One gentleman introduced himself as a 'rock n' roll guy.' He talked about his guitar and how he got bored with playing three chords ... that's why he plays rock now. Another guy was a first generation Pie Town resident. He didn't say two words to anyone. A young lady from New York was a great host. I asked her what made her move from New York to here, and she said, 'I don't know ... I just like it here.' All I could hear in my head was Montgomery Gentry singing, 'This is Pie Town, na na na na na!'"

Later that evening, Jimmy stayed at the Toaster House -- a hostel that got its name from all the toasters nailed to the fence surrounding the house. "[The owner], Nita, raised five kids in this house and cooked on a wood stove," Jimmy explains. "She's a real country girl -- I'm talking about a Miranda Lambert type of country girl. She carried her flask next to her breast and wore a dress. Her gray hair was pinned up like a church lady. She seemed to be very out going but vigilant. Her eyes were strong, like an Indian. Nita opened the Toaster House about 15 years ago when she was in her front yard and saw a hiker walk by. She stopped him, invited him in, fed him and he ended up staying a few days."

Nita eventually moved out of the Toaster House and into a new house on the hill behind the Toaster House, but to this day the doors to the Toaster House remain unlocked year round to accommodate the folks who pass through the area. "It's become the central hub for hikers hiking the Great Divine through Pie Town," Jimmy explains. "All that's required is that you leave a tip in the refrigerator freezer, which is in the back yard, if you take any food out. And you have to sign the guest book that lays on the kitchen table."

On Jimmy's last night in Pie Town, N.M., many of the locals -- including the baker and the waitress from the Pio-O-Neer Cafe, showed up at the Toaster House to celebrate having Jimmy Wayne in their town. "There was chicken soup on the wood stove cooking while a bucket caught the rain water leaking from the elbow of the stove pipe," Jimmy recalls with a big smile. "There was music being played in the living room; songs I'd never heard ... The aroma of candles, marijuana and laughter lingered in the air. It was like a scene from a movie, but I don't know which one. The Toaster House party was one I'll never forget.

"Jimmy Buffett never showed up, and he missed one hell of a party," Jimmy jokes. "However I'm sure he did just fine in the gulf!"

Jimmy crossed the Arizona state line on June 30. He expects to arrive in Phoenix, Ariz. at HomeBase Youth Services around July 31, ending his incredible journey on foot from Nashville to Phoenix. To keep up with Jimmy's progress, follow him on Twitter.