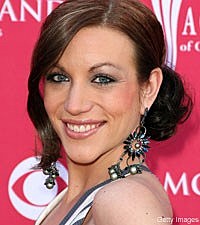 Jessica Harp skyrocketed her way onto the country scene with a No. 1 debut single, a gold album and a Grammy nod. But that was all as one-half of country duo, The Wreckers. Now, the feisty brunette beauty is going out on her own. Her first solo single, 'Boy Like Me,' was released to country radio last month, and its video premiered right here on The Boot. Harp says she is excited for fans to hear more music from her upcoming album, 'A Woman Needs.'

"This is the album I have dreamed of making since I was eight years old and singing along to my mom's Judds and Reba McEntire records," she says. "In a way, it's like going back to square one after being in a successful band, but at the same time, it makes everything that I've done on my own feel that much stronger because I know I have stood on my own two feet."

Harp explains that her solo venture came after she and her Wreckers partner, Michelle Branch, began moving in different creative directions. Still, she doesn't rule out a Wreckers reunion.

"I think we knew it was better for both of us to move on as solo artists and come back to each other in the future if we felt ready for that," she says.

Harp promises that 'A Woman Needs' is more upbeat than the Wreckers' 'Stand Still, Look Pretty' album. She says that because the majority of songs she and Branch cut for that project are sad, their live shows suffered.

"We would play hour-long sets at these big fairs and festivals where people just wanted to dance and have a good time," she explains. "So I was thinking about touring and playing the songs live when we recorded ['A Woman Needs']. But I think there's something for everyone here. I mean, how can you make a country record without songs about heartache? You can't!"