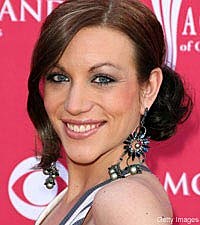 Jessica Harp is happily flying solo these days. After her successful stint as a duo with buddy Michelle Branch in The Wreckers, Jessica felt the time was right to do her own thing again. Finishing up her first album since The Wreckers, the debut single, 'Boy Like Me,' is a clear indicator of what fans can expect.

"The reason I chose that song, for anyone who knew my background and the Wreckers, I wanted to do something different from that," Jessica tells Pennsylvania radio station WIOV. And while she insists she enjoyed her time as part of the duo, Jessica adds that she wanted "to show people, as far as being an artist and a songwriter, there are many different sides to me other than just sad, sad songs, which is pretty much what the Wreckers did."

'Boy Like Me,' which she calls, "sassy and fun," ended up being much more meaningful to the 27-year-old, thanks to a few friends and one hot country superstar. "My producer Jerry Flowers has been with Keith [Urban] since Keith [was] with The Ranch. Half of Keith's band played on my record. When we got done cutting 'Boy Like Me,' everyone sort of went, 'This is right up Keith's alley.' So Jerry sent him the song, and he loved it and wanted to come play on it."

Jessica may be reemerging as a solo artist, but she did form another duo last year, when she married former Wreckers fiddle player Jason Mowery. "The first time I met him was in my dressing room at the Ryman Auditorium," she says. "It's known to be a place of love. It's where Johnny Cash and June Carter Cash met ... He ended up proposing to me at the Ryman. He got my manager in on it and faked that I had a photo shoot there, and I show up and there's just a stool center stage with the box with the ring and our favorite photo of Johnny and June."

The title track of the album, 'A Woman Needs,' is Jessica's second single that's currently climbing the charts. The full album is due Sept. 22.