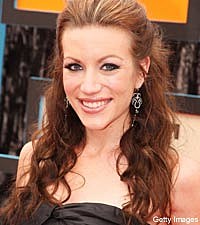 Jessica Harp has found the boy like her -- her guitar player, Jason Mowery, whom she married last year. Now, the singer who branched out from the Wreckers with her first solo single, 'Boy Like Me,' wants to help her fans find their own Mr. or Ms. Right.

Jessica and her record label, Warner Brothers Nashville, have teamed up to create the 'Find Your Perfect Match' quiz. Click on the 'Take the quiz now' link in the widget below to get started finding your soulmate.

The Boot had Jessica take the quiz, too. Her answers were:

Those results are certainly true for Jessica, who says her witty hubby truly is the boy like her.

"The best thing we have in common is our sense of humor -- we love to laugh," the singer tells The Boot. "One of the most important things in a relationship is to make each other laugh. I'm never bored with my husband. He's a goofball!"

'Boy Like Me' is one of only three tracks on Jessica's upcoming album, 'A Woman Needs,' that she didn't write. It was penned by someone Keith Urban fans might find familiar: Jerry Flowers, who is Keith's bass player and Jessica's producer.

"When the Wreckers were on tour with Keith Urban, Jerry and I started writing for the record," Jessica explains. "He played it for me, and I made him save it for me. Half of Keith's band ended up playing on the record. So we finished that song, and then Keith said he wanted to come play on it, which was awesome!"

Jessica's full album is expected out later this summer.