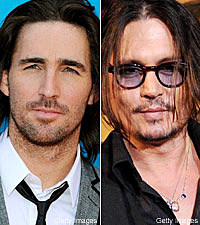 Jake Owen just shot the video for his new single, 'Tell Me,' and being in front of the camera is something he would like to do more of, especially on the big screen.

"I'd like to do that," Jake tells The Boot. "I don't have any problem being in front of a camera and just having a good time. That would be cool, but it would have to be the right thing. Not cheesy, but cool. I'd have to be pretty cool."

With his movie star good looks, Jake could play any number of roles, but as he says, it would have to be a "cool" character. "For instance, Johnny Depp is cool," says the Florida native. "He can do the dude from 'Pirates of the Caribbean,' or 'Edward Scissorhands,' or he could be the guy from 'What's Eating Gilbert Grape?' and 'Donnie Brasco,' or he was the guy in 'Blow.' I could [play] any of those guys."

For right now, Jake is playing the part of a young country singer. To totally get into that character, he has to be on the road performing in front of a live audience, and he's busy doing just that. On Friday, May 30, Jake will be in Baton Rouge, La., for the Bayou Country Superfest.