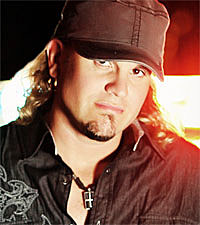 Ira Dean says he's very proud of his new single and video, 'Somethin' 'Bout a Sunday,' noting that when he and Josh Thompson wrote the tune, he drew on an experience he had with Johnny Cash to help keep the song honest.

"When Josh came over that day I thought we were gonna write something uptempo and rock, but he said he wanted to write something truthful and honest," Ira tells The Boot. "That reminded me of a conversation I had with Johnny Cash when I was living with him and June for a while. We were sitting on the back porch one day and he told me, 'When you're writing a song, son, always stick with the truth. You can't go wrong with the truth; people recognize it right away.'

"So I just started spilling my guts about stuff that had happened to me and things I did. I figure if someone's gonna tell on me it's gonna be me. We just started throwing out lines back and forth. We wrote a verse and chorus and I thought, 'Oh my god, we've said so much. What else can we say for the rest of the song?' Then Josh, who is so understated as a songwriter, said, 'Amazing Grace' was wrote for guys like me.' I was like, 'l hate talented people.'"

At the time they wrote the song, Ira didn't have a record deal but that problem soon resolved itself when he signed to Average Joe's Entertainment. Even before that, he had played the song for Mel Tillis, who told him he would be crazy if he didn't cut it. Ira had already recorded it when Colt Ford heard the song, and gave him the green light to self-produce an album for the label.

Ira then decided he needed a video for the song -- and knew just the right setting for it. "Every year I go to Wabash, Ind. to do a charity event there, talking to troubled students about songwriting and how they can put their thoughts on paper," he explains. "Even if they don't want to pursue being a songwriter, it's a way they can have an outlet so hopefully they don't do all the stuff I did."

The town was built in 1903 and has been restored to its original turn-of-the-century splendor. Ira loaded up his girlfriend and video producer, songwriter Marcel Chagnon and head north of Nashville. He didn't tell anyone where they were going. He also neglected to tell his label that he was doing a video.

After about three hours, Marcel demanded to know where they where headed. "It's about four more hours," Ira told him, at which point Marcel had a few choice words to say about the video shoot. "Once we got there he looked at me and said, 'I get it. I understand. We could stay here for a month and shoot footage.'"

Ira, a recovering alcoholic, says he didn't want the video to be preachy. "It's my story. I'm not trying to tell everybody to change. This is me personally. For me, it's evolving and changing. If I can change, anybody can. Alcohol isn't a bad thing, so I'm not telling you to stop drinking. It's me personally. That's what it's all about."

They wrote the concept for the video once they arrived in Wabash, where Ira walks into the town's theater and watches his story in black and white. Mel Tillis guests as Ira's friend who gets thrown in jail with him in one of the scenes. That scene and a few others were shot in Nashville but the rest was shot in Wabash.

"They opened the town to us and they couldn't have been nicer," Ira notes. "We found out that the Five Hour Energy drink is made there so that's how we stayed awake to make the video!"

Because Ira's label found out after the fact that he had done a video without telling them, he struck up a reasonable bargain with them.

"They came to me and said, 'So we hear you did a video. We weren't there for the shoot.' I told them, 'Look if you like it you pay for it; if you don't I'll pay for it.' I'm glad they liked it because I didn't have the money. I would have had to sell some stuff. I'd be walking today because I'd have had to sell my car."

Ira has been in the studio completing his album, which should be out later this year.