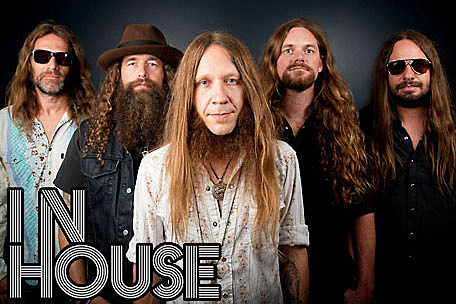 The five musicians of Blackberry Smoke stride into AOL Music's New York City office on a day for celebration, as just hours earlier their new album, The Whippoorwill was released after months of blood, road sweat and studio tears. Judging this book by its long-haired, tattooed cover is not necessarily inappropriate, as the guys look very much like the legends who've inspired their music: '70s Southern rock legends, that is. In fact, Blackberry Smoke has widely been pigeonholed as a "country" band, which doesn't quite fit these music industry veterans who have spent a decade crafting a diverse style of Southern rock, with a dash of blues, soul and, yes, country.

"We are, in essence, a rock 'n' roll band. We've never told anyone that we're anything else, really," lead singer Charlie Starr shares. "We love blues and jazz and country music probably more than a lot of country artists do because we like traditional music, whether it be country, blues, jazz, gospel or rock 'n' roll.

"So when we play country music, we play what we think country music is, not shiny pop," he continues. "Taste is a funny thing, everybody's got it. If I had my way, I would only have it. [laughs] I would tell everybody else what they were supposed to like, and we would be the biggest band in the universe."

In true Southern fashion, Charlie reveals the title of Blackberry Smoke's third studio album is partially inspired by his grandmother, who was the one that taught him the sound a whippoorwill makes.

"My grandmother was the greatest grandmother in history. She taught me a lot about life," he reflects, his Georgia accent running deep in the Big Apple. "She specifically taught me as a little boy what sound a whippoorwill makes, among other bird calls. So it's a tribute to her."

This kind of connection to roots and family is reflected throughout the album. In addition to the sentimental title track, "One Horse Town" speaks to the joys and sorrows of a tight knit community, while "Everybody Knows She's Mine" tells the true story of a very proud love.

"(I appreciate) people who say a certain song helped them get through a certain spot in their life ... or if they feel bad, they put a certain song on," Charlie says, "or if it makes them drive faster!"

But even negative reactions resonate with the bandmates. "We had one song not long ago that caused this young girl to basically curse me out from the audience," Charlie recalls. "And I thought, 'That's fine too! That's a reaction!' That was a song called 'Shakin Hands With the Holy Ghost' ... I guess she thought it was blasphemous."

Besides blasphemy, love, bird calls and the blues, what really sets The Whippoorwill apart from previous releases by Blackberry Smoke is the big label support they have this time around. Long time friends of Zac Brown, the band recently signed with his label, Southern Ground Records, and have enjoyed the creative freedom that backing of this caliber offers. Working with an old friend offers a certain level of mutual respect, too.

"He is an impressive person. He's got that thing, you know? He's bigger than life," Charlie says of the Grammy-winning Zac Brown Band's frontman. "But he's a good friend too, you know? He can get in there with us and get his hands dirty."

"He's pretty down to earth. He's one of those people that wants to help people, he really does. He feels sorry for us," drummer Brit Turner jokes, adding, "He's been good to us."

Clearly, Zac knew a good thing when he heard one, as The Whippoorwill has been given rave reviews. From the Washington Post to NPR ... to our AOL office, people are taking notice of this album of infectious songs and stellar musicianship. It's a far cry from country pop, southern to the core, and will be sticking around for decades to come.