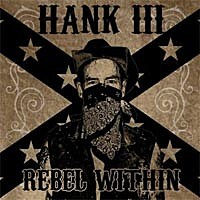 Doubters need only check out his latest album 'Rebel Within' -- due out May 25 on Sidewalk Records -- which includes songs like 'Getting' Drunk and Fallin' Down,' 'Rebel Within,' 'Tore Up and Loud' and 'Drinkin' Over Mama.' But don't start thinking his lifestyle has led to a lack in productivity; Hank wrote 10 of the 11 songs, sang the vocals, played drums and acoustic rhythm guitar, and also recorded and produced the album in his home studio.

"I don't like being told what to do, and I don't need to be told what my record should sound like," Hank, son of Hank Williams, Jr., says. "I got that covered."

The songs are already creating buzz, some of which will be heard on the June 13 episode of the HBO series 'True Blood.'

Plus, Hank will tour behind the album. As fans know, each of Hank's three-hour long concerts begin with a country set, continue with a louder hillbilly set and end with a rock set that includes his band Assjack.

"I give everybody some of what they came for," says Hank. "You can't say I don't work hard and give all I got."

Hank is beginning the 12-city Crazed Canada tour on June 4 in Toronto, Ontario, and has dates scheduled until June 19 in Vancouver, British Columbia. For more dates, check Hank's website.