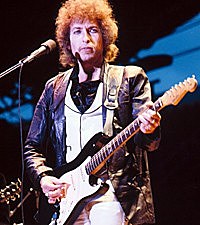 Dylan made recording in Nashville cool when he cut 'Blonde on Blonde' there in 1966 with local musicians. He made two more country-oriented records in Music City: 'John Wesley Harding' and 'Nashville Skyline,' which featured a duet with Johnny Cash and a rising session fiddler named Charlie Daniels. Dylan also appeared on the first episode of 'The Johnny Cash Show' in 1969, and in 1998 Garth Brooks recorded his 'To Make You Feel My Love.'