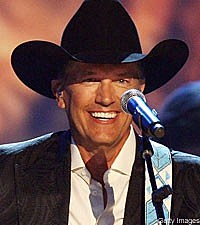 The Dallas Cowboys will celebrate the opening of their new stadium with one of their biggest fans. George Strait will perform at a special concert at the new, $1.1 billion complex.

"I grew up in South Texas and have always been a Dallas Cowboys fan," said Strait. "I have a lot of great memories from playing the many shows we did at Texas Stadium, as well as watching America's team win their share of Super Bowls. I am very excited about having the opportunity to do the first concert ever in the magnificent new Cowboys stadium and share this momentous occasion with all the incredible country music fans in the Dallas-Ft. Worth area."

In addition to Cowboys' home games, the new stadium is already scheduled to host the 2011 Super Bowl, the 2010 NBA All-Star game and the 2014 NCAA men's Final Four. It will also be home to college football's Cotton Bowl.

Strait will be joined by Reba McEntire, Blake Shelton and Julianne Hough at the stadium's grand-opening festivities, which take place on June 6. Tickets go on sale February 28.