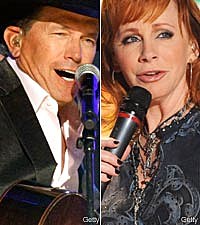 George Strait and Reba McEntire are set to hit the road together beginning Friday night (Jan. 22) in Baltimore, Md., for one of the year's most anticipated concert tours. For most of us, it seems like a no-brainer to have the reigning King and Queen of country music in one place at one time.

For George, it took actually performing together for the idea to take root. "I'm really excited about this," says the legend. "I don't know why we hadn't done it before. When we opened up the new Cowboys Stadium, it was like a light went off. 'We gotta take this out on the road.'"

King George is currently scaling the country charts with the title track of his album, 'Twang,' while Reba has just released 'I Keep on Loving You,' following her four-week chart-topping success with 'Consider Me Gone.'

George and Reba will remain on the road together for nearly 20 shows, currently scheduled to run through April 10.