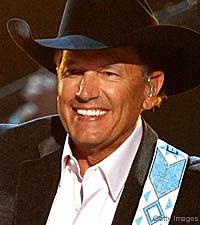 With a country music career spanning four decades, George Strait has rightfully earned the title of "King George." As the Texas native prepares to release the highly-anticipated 'Twang,' one track from the album is garnering lots of buzz. 'El Rey,' which in Spanish means "The King,' marks the first time he's ever recorded a song sung entirely in Spanish.

"For years, I never knew what the song was totally about," says George. "It was something new for me. Then I got the translation and saw what a really cool song it was."

So, what is it all about?

Songlations, a website containing the English translations of Spanish compositions, explains that the song, which was written and first popularized more than 50 years ago by Mexican ranchera musician José Alfredo Jiménez, contains such lines as: "I have no throne nor queen/Nor anyone who understands me/But I continue being king."

And the Latin American Music Review goes further, by saying of the song's creator: "Jimenez's purpose was not to sing about himself as much as to evoke in his listeners memories of similar sentiments and experiences in their own lives." (via the9513.com)

The same could certainly be said of George Strait, although the King does have a Queen. He and wife Norma eloped to Mexico and have been married for 28 years.

George Strait's 38th album, 'Twang' will be released August 11. Be sure to check out The Boot on Monday for an in-depth preview of the album.