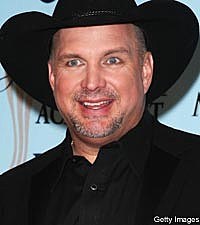 Garth Brooks and Carroll Shelby, creator of the legendary Shelby Mustang, are teaming up in Las Vegas this weekend to auction off the #002 CSM 2011 Shelby GT350 on July 16 at the Wynn Resort where Garth has been performing all year.

Those attending the auction will be treated to a private concert by Garth, and the highest bidder/winner of the Shelby GT350 will also receive a special VIP tour of the Shelby Las Vegas facility, the opportunity to customize the car at the Vegas showroom, a meet-and-greet with Garth and Shelby, and autographs from both on the new Mustang.

The pre-auction has begun, with the bid already soaring to $90,000. All proceeds from the sale will benefit childrens' charities through both Garth's Teammates for Kids Foundation and the Carroll Shelby Foundation.

For more information on the auction and how to join in on the fun,visit www.campaign.constantcontact.com. Garth will return to the Wynn Encore Theater this fall for a series of shows in September, October and November.