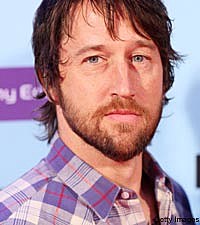 Foo Fighters longtime guitarist Chris Shiflett has no plans to leave his current rock 'n' roll gig, but he recently made the surprising announcement that he has a new side gig in country music! Chris is frontman of the new country/Americana band, Chris Shiflett & the Dead Peasants, who will release their debut CD next month.

"One of my favorite kinds of music is old country and old rockabilly and modern Americana like Sun Volt, Wilco and Ryan Adams. I love all that stuff," Chris explains to NME. "There's really no real big loud Les Paul [guitar] pumping through a Marshall amp kind of moments on this record. It is so far from anything I've been a part of with Foo Fighters and it was just really fun to do."

Enlisting the help of Mavericks guitarist Eddie Perez to record the project, Chris says the album was the result of a natural progression more than a deliberate plan. "I started doing some Americana shows with some friends and that evolved into recording some demos," he says. "We did that and I thought, 'Well I've got this studio at my disposal, let's go make a record and see what happens.'"

He may be leaning toward a career in country, but Chris says fans can still expect influences from other genres in his new music, even goth. "I always write from personal experience so there's a lot of love songs on there and there's a lot of songs about death because a few friends and relatives of mine have died over the last few years," he acknowledges. "Melodically it is not dark, but lyrically it's pretty sad."