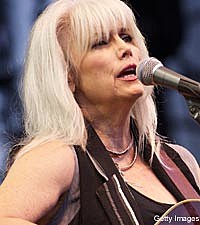 Emmylou Harris has found recording straightforward country and rock music important to her career, but she believes one of those recordings may have disrupted her fan base.

"Most of the things I did were very eclectic, a real mixed bag, although the country-rock experience and traditional country were very important to me," she says in a recent Gibson interview. "But I think 'Wrecking Ball' really disturbed some fans. I think I lost them. But I brought in a whole new world of people who were probably curious in the beginning."

As fans know, the songs on 1995's 'Wrecking Ball' moved away from Emmylou's acoustic, country-folk sound and into more rock-oriented territory, guided by producer Daniel Lanois, known for his work with U2.

On her next album, Emmylou plans to return to her signature eclectic musical style; mixing folk, pop, country and blues. She has spent the past year writing material for a new album that she plans to start recording no later than August. The iconic singer says the songs themselves directed their own sound, rather than a conscious decision to move them toward certain genres.

"You never know where these things come from," Emmylou says. "I find with records, they become what they're going to become. They take on a power and a direction of their own. Part of making records is to honor that and not try to force it."

Much of that formative work happens in the studio and is often discovered by the various musicians with whom Emmylou records. The exception to that rule is when she records bluegrass.

"Over the years, we have done a few things that were very specific. I think the best example of that was 'Roses in the Snow,' where we consciously set out to get that bluegrass feel and that acoustic feel; so no one is going to confuse that with anything. But also, I'm very happy in that eclectic world. I'm happiest when I can mix and match," she continues. "Once in a while I think it's good to say, 'Alright, let's work in this form.' Bluegrass has a very, very strict musical form. Once you start to dilute it, it disappears. It doesn't mean that what you get can't be good. But I think it is a restrictive form in a good way. This isn't going to be a bluegrass record."

Emmylou Harris is currently part of the Lilith Fair and has concerts scheduled throughout the year. For a full list of cities and dates, click here.