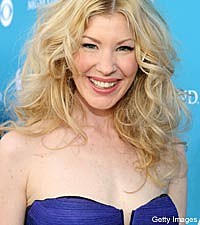 Emily West's recent guest appearance on NBC's hit show, 'Celebrity Apprentice,' had the country songbird admittedly a little starstruck. Joining former 'Apprentice' contestant Trace Adkins and label mate Luke Bryan, Emily was part of a special Nashville-themed episode focused on how to make someone a successful country music star. But it was a pop star from New York who had Emily's full attention.

Paired with 'Celebrity Apprentice' contestant Cyndi Lauper during the show, Emily explains that the experience was an emotional walk down memory lane. "I used to listen to her as a little girl," she tells Nashville's Tennessean newspaper. "I wanted to be her when I grew up. I was in tears when I watched it, because Cyndi was so surreal and was fighting for me."

Emily, whose debut album is due out later this year, is already becoming a household name. After her scene-stealing stint on 'Apprentice,' internet searches for her went through the roof. 'Emily West' was the ninth most popular search term in all of Google on Sunday night.

Emily's current single, 'Blue Sky,' which features Keith Urban on both vocals and guitar, is steadily climbing the charts. The singer-songwriter is getting ready to hit the road with Ryan Bingham, Jamey Johnson, Little Big Town, Jack Ingram, Mongtomery Gentry and Heidi Newfield on the Country Throwdown tour, which kicks off May 14 in Tampa, Fla. Click here for a full list of dates.