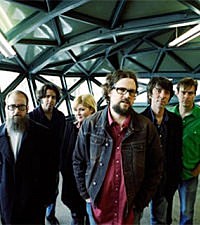 My, how Farm Aid has grown.

We told you not long ago that Willie Nelson, John Mellencamp, Neil Young and Dave Matthews teamed up for the October 2 event in Milwaukee, Wisc., but now there are dozens more entertainers in the line up including Kenny Chesney, Jeff Tweedy, The BoDeans, Lukas Nelson and The Promise of the Real and the Randy Rogers Band. There's even a Farm Aid Eve concert by the Drive-by Truckers.

"This was something we all felt strongly about doing," Chief Trucker Patterson Hood tells The Boot of the October 1 show scheduled at the Pabst Theatre in Milwaukee. "Anything we can do to show this cause is near and dear to our hearts, we want to do it."

Although the band has spent months on the road – including playing numerous dates with Tom Petty – the Truckers want to take the time to support American farmers and the other Farm Aid issues including sustainable fuel and healthy eating initiatives.

"I think even [Mike] Cooley is eating healthier these days," laughs Patterson, referencing his band co-founder.

Tickets and show information about the Drive-by Truckers' Farm Aid Eve concert can be found here.