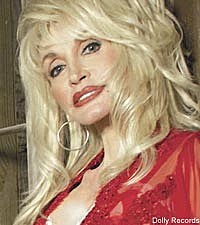 Dolly Parton has never hidden her troubled past, including her rise from complete poverty to becoming one of country music's most enduring legends. But now she reveals another painful struggle from more than 20 years ago -- one that almost ended her life.

"I went through a dark time -- it lasted several months," she tells the Globe (quote via NY Daily News.) "I think I would have made a nice mama. I always thought I'd have kids. We tried to for so many years, and then I put it on hold because my career was doing so well and I was on birth control pills."

Finally, she says, after grieving her childless life for several months, she had an epiphany. "Then one day, I just said to myself, 'Right, get off your fat butt, or if you really are suicidal, then go and shoot your brains out,'" she says. "I thought, 'Maybe God didn't want me to have kids so that everybody else's kids could be mine.'"

The superstar, who also recently spoke out about her marriage to her reclusive husband, has penned her first children's book, 'I Am A Rainbow.' An outspoken advocate for children's literacy, Dolly founded the Imagination Library, which provides a new book each month for children from infancy up to age five who are born in her hometown of Sevier County.