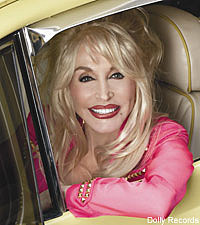 "Get Dolly Parton back on the radio!" country's original blond bombshell exclaims, sitting in her manager's Nashville office on a chilly March morning. Parton is back with her first new mainstream country music recordings in 17 years, and the legendary singer-songwriter is hoping country radio will take notice.

Her fans sure did. Parton's brand-new 'Backwoods Barbie' CD debuted at No. 2 on the country album charts, with her highest first-week sales in almost two decades. The album is the first on Parton's own label, Dolly Records, a venture she started after failing to get attention from the big leagues.

"They think I'm over the hill," Parton says of Nashville's major record labels. "But I don't believe that. My music is as young today as it was ever. And I always say, 'I may be as old as yesterday, but I'm as young as tomorrow, too!'"

Parton, long celebrated for her songwriting, offers fans a personal look into her life on 'Backwoods Barbie.' "That's my story," she says of its title track. "I've made jokes through the years about how I look ... It costs a lot to look this cheap!" she says, laughing.

The album's first single, 'Better Get to Livin'' might also be called 'Dolly's Theme.' It's a catchy, motivational track with a message about finding happiness by taking control of your life. "I call myself the 'Dolly Lama,' because people are always asking my advice," Parton jokes. "But I get down like everybody else, and I try not to wallow in it too long. I think people love to wallow in their misery and not try to make the changes necessary. So I think 'Better Get to Livin'' is a good inspiration for a lot of people."

Parton wrote nine of the album's 12 tracks and includes two covers fans might find surprising. She puts a country spin on the Fine Young Cannibals' 'Drives Me Crazy' and Smokey Robinson's classic 'Tracks of My Tears.'

Though currently sidelined by a back injury, Parton is keeping busy. She's writing all of the music for the upcoming Broadway version of her hit movie, '9 to 5.' And she says she can't wait to get back on the road to share her new music with the fans. "I'm a gypsy at heart," she says of touring. "I love being onstage ... I'm not faking that!"

Parton also keeps it real in our candid Q&A with the star, talking about everything from her famous goddaughter she calls a "little Elvis" to her famous physical assets she's been "wagging around" for years. Click here for the continued wisdom of the 'Dolly Lama.'