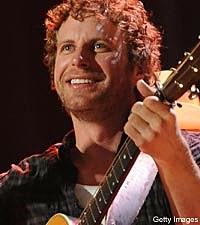 Dierks Bentley is hitting the national TV circuit again next week to bring more of his bluegrass-influenced 'Up on the Ridge' music to fans nationwide. But the singer (and soon-to-be-dad for a second time) admits he's a tad nervous, considering that the last time he appeared on a network TV show, the power went out right before his performance!

Dierks' appearance on Jimmy Kimmel Live during the outage had the singer and his band performing acoustically as Jimmy taped the show on his computer webcam. The incident become legendary in the TV world, though Dierks hopes they won't have quite that much of a challenge during this set of appearances as he pays his first-ever visit to David Letterman and visits Late Night With Jimmy Fallon as well.

"I'm excited to do Letterman," Dierks tells the Boot. "I've done every show it seems like except Letterman, so it's really cool to get a chance to do that show for the first time and hopefully the power will stay on! But if it happens again, we're prepared. This record really features acoustic instruments and that's what we're doing on these shows, so we can actually get by without power. But after that Kimmel thing we feel like we can handle just about anything! Jimmy Kimmel did a great job of saving the ship on that one ... he turned it into a really cool thing.

Dierks guests on 'The Late Show With David Letterman' on Tuesday, July 27, where he'll perform the ballad 'Fallin' For You.' He'll visit 'Late Night' on Wednesday, July 28, to sing the romantic 'Draw Me a Map.''