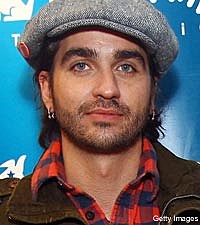 Cross Canadian Ragweed lead singer Cody Canada is recovering after being seriously injured during a concert last Friday (Apr. 30) in Stillwater, Okla. The Tulsa World newspaper reports that Cody suffered a concussion after being struck in the head by a liquor bottle. The injury forced the band to cancel a performance in Kansas City on Saturday.

In a statement on their official website, the band told fans: "We are sorry to let you all know that we are having to cancel our performance tonight at the Red Dirt BBQ in Kansas City due to an incident last night ... in which someone struck Cody in the head with a liquor bottle from the crowd. Cody received a concussion and 20-plus stitches and the doctors have told him not (to) play."

The incident took place at the annual Calf Fry "Testicle Festival" at Stillwater's Tumbleweed Dance Hall and Concert Arena. A local news report, which can be watched on Oklahoma City's KOCO TV channel on YouTube, said it happened during a song in which the band encourages fans to throw empty beer pitchers on stage to hit back into the crowd. Cody reportedly told police he didn't want to press charges. The band is scheduled to play Tennessee's Bonnaroo Music Festival in June.