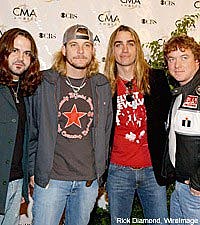 One of the most eclectic and popular summer music festivals, Bonnaroo, is unveiling the lineup for the event which will take place from June 10-13 in Manchester, Tenn.

Among the acts announced for the festival is the Oklahoma-based country-rock band Cross Canadian Ragweed. The group, whose latest album, 'Happiness and All the Other Things, was released last year, are perhaps best known to mainstream country fans for the 2004 single, 'Sick and Tired,' which featured Lee Ann Womack.

Other acts appearing at Bonnaroo this year include Jay-Z, Dave Matthews Band, Norah Jones, Weezer and dozens more. In past years, the festival has incorporated bluegrass acts into the lineup, including the Del McCoury Band and Cherryholmes. Comedian and banjo picker Steve Martin is on the schedule this year.