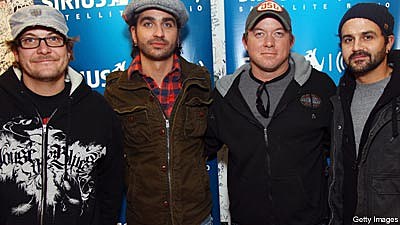 Cross Canadian Ragweed are parking their tour bus for a much needed break. The country-rockers -- comprised of Grady Cross, Cody Canada, Randy Ragsdale and Jeremy Plato -- have played over 220 dates a year, for 13 of the last 15 years. Life on the road has proven to be a little more taxing these days, as the group takes a stand to put family first.
"For many years, my band has been my top priority," says Randy, CCR's founder and drummer. "Being in a touring band, you have to give it your all. Right now, I need to be at home for my family, particularly my son JC, who has autism. He's 10 years old now and still struggling in his development. I feel the only way I can help him is to be more hands on and close to home. I would understand and support the band's decision to get another drummer and press on. But that's not what they wanted to do. I was blown away by their decision and their support."

"'We've always said from the start, we're Ragweed as the four of us, or not Ragweed at all," says Cody, CCR's lead singer, who just recently suffered a concussion when he was hit in the head with a liquor bottle during a concert.

"These guys, they're my brothers, I love playing with them," echoes Grady. "I'm sure we'll be back on the road soon."

"We've been at this for a long time, we've all had to spend time away from home missing birthdays, holidays ... it'll be good for us to have a breather," adds Jeremy.

There's no word on how long that breather will last, but Cross Canadian Ragweed are on the lineup for next month's Bonnaroo Music Festival in Tennessee.