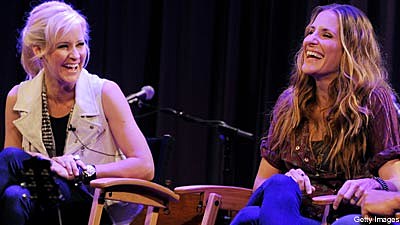 When Emily Robison was in sixth grade, she thought she had her career path all figured out: "I was convinced I was going to the Air Force Academy and fly jets. Then I realized I'd have to cut my hair," she says.

Luckily for the rest of us, Emily's desire to keep her locks long was our gain, and instead, she grew up to become one-half of Court Yard Hounds and one-third of the Dixie Chicks. She discussed her role as head Hound during a May 10 Q&A at the Grammy Museum in Los Angeles, joined by sister and fellow Chick and Hound Martie Maguire.

The Court Yard Hounds, whose self-titled CD came out May 4, were born when Chicks lead singer Natalie Maines wanted to remain on hiatus while the sisters were ready to get back to making music. Emily found her divorce from Charlie Robison provided "fertile ground" for songwriting material. Those poignant, often confessional tunes became the foundation for the album, especially after Martie kept her sis from giving the songs to other artists. "I felt like she was hocking the family jewels if she gave the songs to someone else," says Martie.

Emily admits she still hasn't reconciled sharing her personal life in such a public fashion. "I think I'm still in denial about how exposed I am," she says.

As the two began recording without Natalie in Martie's home studio in Austin, it felt strange, "like an arm was missing," Martie notes. But as they surrounded themselves with other musicians and Emily became more confident singing lead, the album began to take shape.

The sisters gave Natalie a copy of the album when they saw her on New Year's Eve. "She was so supportive," says Martie. "It took some of the pressure off of her. We've wanted to go out for four years and she didn't. It was the first time we'd disagreed on anything."

After the Q&A, the pair played five tracks from their new set backed by the full band that will accompany them on their summer Lilith Fair tour dates.

The Dixie Chicks will also reunite to play eight shows with the Eagles this summer. As for the possibility of a new Chicks album, the first since 2006's Grammy-winning 'Taking the Long Way,' Emily says, "I don't know," before adding that she's "sure at some point" the trio will go back into the studio.