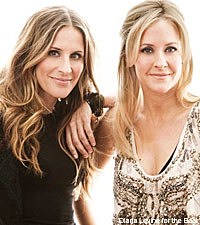 Court Yard Hounds, the duo featuring Dixie Chicks co-founders Emily Robison and Martie Maguire, will have somewhat of a Lilith Fair déjà vu this summer, returning to the music festival yet again as a new band.

"Lilith Fair was a great experience for us the first time we played it," Martie tells The Boot of the Chicks' 1999 Lilith performance. "We were ... not a new band, but a new band as far as mainstream kind of airplay or success. And I thought it was important back then, because artists actually invited newer artists like ourselves to their shows. Sheryl Crow was coming into our dressing room and saying, 'Hey come out and play 'Strong Enough' on my set ... and what do you want me to sing on your set?'"

Now, over a decade later, Martie and Emily will return to the all-female festival, this time as Court Yard Hounds. Martie is hopeful the shows will have the same collaborative vibe as in the past.

"I think that is definitely needed on festivals and live music shows," she says. "You always see somebody's set, and somebody else's set ... and sometimes you never even meet the artists during the festival. They're just so isolated. They go back to their bus. This is such a unique kind of festival."