Country music and patriotism have always gone hand-in-hand. Whether in time of war or peace, American anthems have been fan-favorites for decades. The Boot counts down our 10 favorite country music tributes to the U.S.A. 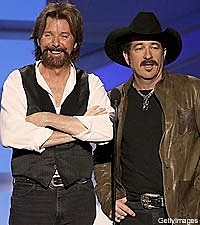 This song was released just before the 9/11 terrorist attacks and became a patriotic pick-me-up afterward. It resurfaced in 2004 as President George W. Bush's re-election campaign song.