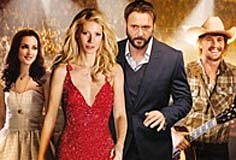 To celebrate the DVD release of 'Country Strong,' in stores this week, The Boot has an exclusive deleted scene from the flick, which co-stars Gwyneth Paltrow, Tim McGraw, Leighton Meester and Garrett Hedlund. Below is a clip you couldn't see in the theater, featuring a dramatic moment with Gwyneth and Garrett.

Gwyneth, who plays country superstar Kelly Canter, drew inspiration from numerous singers for her big-screen role, including her on-screen husband's real-life wife. "I studied Faith [Hill] a lot," Gwyneth told The Boot. "I studied Shelby Lynne -- her interviews -- and I listened to a lot of women, everyone from Martina [McBride] to Ashley Monroe to everybody. I just got very enmeshed in the world of it all."

While it may have seemed like a no-brainer role for Tim, the singer told The Boot that he actually turned the part down twice. "It's tough enough to be in a film and not have everybody look and say, 'That's Tim McGraw,'" he said. "So, it's hard to hide and find a character that way, and then to put yourself in your own world, it's tougher to hide behind a character."

Special features of the DVD include an extended performance of 'Shake That Thang,' and the official music videos for Gwyneth's 'Country Strong' and Sara Evans' 'A Little Bit Stronger.'