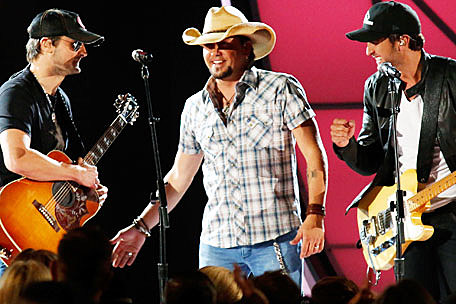 The Boot gathers today's country music news headlines from around the web.

Jason Aldean has his 11th career residency in the country singles' penthouse. His hit song, "The Only Way I Know," featuring Luke Bryan and Eric Church, is No. 1 on both the Billboard and Mediabase charts. "Having Eric and Luke come sing on this track with me was one of the highlights of recording the [Night Train] album," says Jason. "We are buddies off the road and outside of the music business, so this one is extra special for me. After my first No. 1 song back in 2006, I worried I may never have another one. Thankfully, we've been able to rack up a few of them in a row recently, and I have a lot of people to thank for that."

Last week, tickets to Gary Allan's April 17 show at Nashville's historic Ryman Auditorium went on sale and were sold out in just 10 minutes. Now, tickets to a second show, set for April 19, are also sold out. Gary currently has the No. 1 album in the country with Set You Free, and also recently celebrated a No. 1 country single with "Every Storm (Runs out of Rain)."

Another quick seller last week was Kip Moore's March 23 gig at the House of Blues in Boston. Tickets were snapped up in just 20 minutes, marking the "Beer Money" singer's seventh sold-out event so far in 2013. He's currently on the road with Brantley Gilbert and in May will start touring with Toby Keith.

Kristian Bush of Sugarland, and his brother, Brandon, continue their relationship with Turner Classic Movies by joining the network's 31 Days of Oscar celebration tonight (Mon., Feb. 4) for a live-tweet of the 1967 Paul Newman film, "Cool Hand Luke," beginning at 10:00 PM ET. As a bonus, the Bush Brothers have also recorded a cover of "Plastic Jesus," the folk song memorably performed in the film by Paul Newman (on banjo!). Listen to their take on the old favorite, which is currently streaming here. To join in the live-tweet, follow Kristian (@kristianbush) and Brandon (@TheBrandonBush), or the official Turner Classic Movies feed (@tcm), and use the hashtag #31Days.

Craig Campbell is featured during a recent tour stop in Atlanta on HLN's "Road Warriors" series. Craig is captured enjoying his favorite restaurant in the city, performing for a capacity crowd at Wild Bills and competing at his favorite past-time, corn hole. The behind-the-scenes "Road Warriors" segment with Craig Campbell will air Tuesday, Feb. 5 in the 6:00 AM ET hour and again Thursday, Feb. 7 in the 9:00 AM ET hour during "Morning Express with Robin Meade" on HLN.

George Jones has announced that the final Nashville concert of his career will take place Friday, Nov. 22, 2013 at Bridgestone Arena. The iconic entertainer, who is currently on his final tour before easing into retirement, will be joined by numerous special guests at the Music City show, including Charlie Daniels, Lorrie Morgan, Randy Travis, Jamey Johnson, Gene Watson and previously announced guest Tanya Tucker. More artists are expected to be announced as the concert date nears.

Australian sibling trio the McClymonts have received their homeland's two most prestigious awards in country music: the ARIA Country Album of the Year from the Australian Recording Industry Association and the Golden Guitar for the Highest Selling Australian Album at the Australian Country Music Awards. The McClymonts also took home the Golden Guitar for Video of the Year for "Piece of Me," which is the group's seventh No. 1 single in a row. The sisters head to Nashville later this month and are in talks with several Music City-based labels to introduce them to a wider crowd in the U.S. country music market.

The CMA Songwriters Series is set to enter its ninth year with events slated across the country. On March 19, Craig Morgan will launch the 2013 series with two shows at Joe's Pub in New York City, where the series began. Also appearing that night will be songwriters Shane Minor, Bob DiPiero and Phil O'Donnell. On March 20, Ronnie Milsap and Lorrie Morgan are scheduled for a free concert at the Library of Congress' Coolidge Auditorium in Washington, D.C. [Music Row]

Meet Daniel Emmanuel Gokey! "American Idol" alum Danny Gokey and his wife, Leyicet, have shared an adorable picture of their newborn son with People.com. (See the happy family of three here.) "It's been fun adjusting to having a new baby in the house," says the proud dad. "We're a little sleep-deprived right now, but we really love him a lot! He's pretty cute - it's okay to brag, right?"

Watch Jason's 'The Only Way I Know' Lyric Video