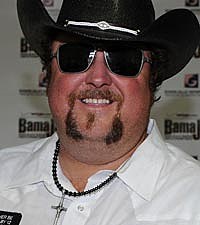 Who better to host a television show about extreme off-road entertainment than a country music artist? The Outdoor Channel has announced plans to debut 'Mudslingers,' starring country rapper Colt Ford and comedian Marc Ryan as show co-hosts. The 13-episode series is set to premiere June 27.

"There's an entire culture that consists of 4x4 trucks, camping, music, and pure madness that we're about to blow the lid off of," Colt explains. "'Mudslingers' showcases that lifestyle and more, and I'm proud to be one of the hosts sharing this with all the folks at home. You better buckle up because this is one hell of a ride!"

Each episode will feature popular recreational parks such as Redneck Yacht Club and Yankee Lake, with on-site interviews, vehicle demonstrations and firsthand glimpses of action-packed events that take place on the extreme campgrounds.

When Colt isn't demonstrating his television personality skills, the 'Country Thang' singer can be found promoting his latest effort, 'Every Chance I Get.' He recently premiered his 'Waste Some Time' music video exclusively on The Boot.