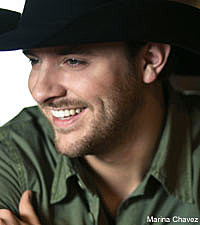 Chris Young has wrapped up filming a new video for 'Voices.' The song was released to radio a few months ago but was was never an official "single." Instead, 'Gettin' You Home (The Black Dress Song),' was the debut single from Chris' sophomore album and went on to top the country charts. Another No. 1 hit, 'The Man I Want to Be,' followed. But now 'Voices' is getting its second chance.

"We had a lot of people at radio who wanted to have the song again," Chris tells The Boot of the decision to re-release the tune. "It barely got inside the Top 40, and the stations that added it had only eight or nine spins ever on the song. So it's still really a new song. It wasn't one of those that got burned out and people don't want to play it. They've been asking us for it. It's cool. I know the fans are really excited about it, and it's a song that the label is really excited about. They came to me with this idea and said we've been hearing this and this ... we think putting it back out would be a great idea. So, I'm not complaining!"

The song was inspired by something very close to the singer's heart -- his family. When it came time to discuss treatments for the video, Chris knew that he didn't want to hire actors. "The more I thought about it, the more I was like I don't want to not use my family in this," Chris explains. "We pulled it together and made it happen. Somebody needs to go hug David McClister, because he was the director on the video. He put up with me and my whole family the whole day! Everybody was in it -- my grandparents, aunts, uncles, nephews, nieces, my mom and my dad."

The only member of the family who was unable to attend the shoot in person was Chris' sister, Dot, who recently enlisted in the U.S. Marines. Chris, however, made sure he found a way to make Dot's presence known in the video. "There's a shot of me picking up a picture of Dot that I'm going to make sure gets in the final cut of the video," Chris says sweetly. "So she's still in the video. It was pretty cool."

The video for 'Voices' will be released in the coming weeks. Chris is currently out on the road with Rascal Flatts on their Unstoppable tour.