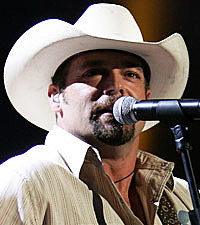 Chris Cagle has been found not guilty of domestic violence. The ruling came Thursday after the country singer's girlfriend, Jennifer Tant, invoked the 5th amendment and refused to testify. The charges stemmed from an altercation Cagle and Tant had in May while reportedly intoxicated. Cagle alleged in police reports he was hit on the head by an umbrella, and subsequently pushed Tant to protect himself. Officers found bruises on Tant's arms, as well as a cut lip, and charges were filed against both of them. Cagle has since come forward apologizing for the incident but insisting he was not drunk.

While the books are now closed on this case, Cagle still faces a different trial in the fall. He's due in a Tucscon, Ariz. courtroom on September 23 to face assault charges stemming from a fight outside a nightclub last December.