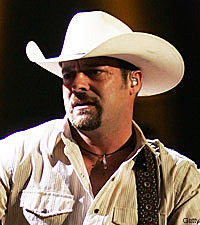 Chris Cagle has a September 23 date in an Arizona courtroom. The singer will stand trial in Tucson on a misdemeaner assault charge stemming from an incident that happened after a December 13 benefit concert there. He is accused of striking concert goer Mark Barry in the face after Barry's girlfriend became verbally abusive toward Cagle. Tucson police say the woman was angry because the singer refused to sign an autograph for her. Cagle's lawyers are arguing that he only struck Barry in self-defense.

Cagle is currently on tour to support his No. 1 album, 'My Life's Been a Country Song.' The trial falls right at the end of his tour.