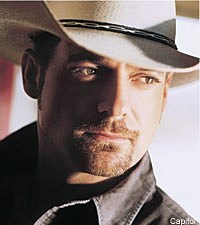 Chris Cagle has been arrested for what was apparently an alcohol-fueled fight. Both the singer and his girlfriend, Jennifer Tant, were taken to a Nashville jail early Wednesday morning on misdemeanor domestic assault charges. Police say the two were intoxicated when the argument turned physical. They say Cagle told them Tant hit him on the head with an umbrella, while Tant said Cagle hit her with her purse.

It was less than a month ago that Cagle talked to The Boot about picking up the pieces after several personal setbacks. He told us that he had "quit drinking" and "quit smoking." He also alluded to being single after a painful breakup, but said he was still searching for the right woman.

See Cagle and Tant's mug shots and read the full story on their arrests here.