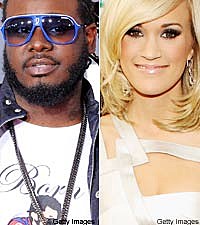 Carrie Underwood shared the Grammy stage with a cross-genre mix of other music superstars on Sunday, in a tribute to the late Michael Jackson. Singing with the country songbird were pop queen Celine Dion, R&B heartthrob Usher, Motown legend Smoky Robinson and R&B singer/actress Jennifer Hudson. One hip-hop star was particularly moved by the performance, and is hoping to snag Carrie for another genre-bending collaboration.

"Next person I want to work with -- and I won't work with anyone else until I get her -- is Carrie Underwood," T-Pain adamantly told The Boombox backstage at the Grammys. "Everyone else can suck it until I get to Carrie!"

If T-Pain scores some studio time with Carrie, it would be his second country crossover. He rapped with Taylor Swift in the hilarious 'Thug Story' during the opening of last year's CMT Awards. Watch the video here.