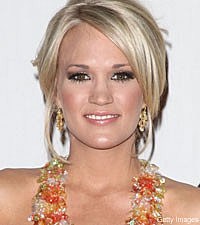 Carrie Underwood has played to millions of people in sold-out venues around the world, but the singer confessed to The Boot at the Clive Davis pre-Grammy soiree that appearing at the Grammys is something different, if only because of who's in the audience. Talking about the cardboard cutouts in front of her at rehearsal, indicating who will be seated there during the show, she says, "Jay-Z was the first marker and the second was Kanye West. And that's just the two people directly in front of me."

Despite some understandable nerves about playing before the titans of the music world, Underwood is equally excited because of the amazing bill. "It's about legendary artists, and everybody knows their songs. And then you're combining those with people that are hot right now, young, starting their careers," she says. "I don't know who's performing before and after me, but I know it's gonna be good, whoever it is!"

With the likes of U2, Paul McCartney, Robert Plant and Alison Krauss, all of whom have stood the test of time, there are a lot of inspirations to draw from, but Underwood's biggest role model won't be at the Grammys this year. "As far as women go, Dolly Parton, she's done everything -- music, movies -- people love her. She's not just a great writer and a great entertainer, she's a great business woman. She's always carried herself very well and always gives glory to God."