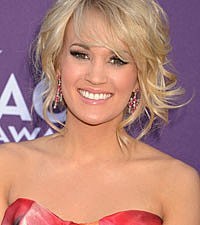 Carrie Underwood's "Blown Away" is among the latest group of singles certified by the RIAA for gold and platinum sales. The tune is Carrie's third double-platinum single (signifying two million downloads) following "Jesus, Take the Wheel" and "Before He Cheats," which has reached triple-platinum status. Gold certifications (for sales of 500,000) have been earned by Florida Georgia Line ("Get Your Shine On)," Miranda Lambert ("Mama's Broken Heart") and Kacey Musgraves ("Merry Go 'Round").

Country newcomer Angie Johnson releases her debut EP, Sing for You, on May 21 on Sony Music Nashville. "I'm fired up about getting new music out to folks," says the singer, who was a contestant on Season 2 of "The Voice." "So many talented people contributed to this project and the experience was humbling and inspiring for me. A lot of heart and personality went into this music and the result is really special, and really fun. It's a little bit of spit and a lot of shine."

Emmylou Harris and Rodney Crowell will be among the musicians performing Saturday (April 13), at the Nashville stop on the North Shore Animal League America's Tour for Life, the world's largest mobile pet adoption event. Taking place from 11:00 AM to 3:00 PM at Crossroads Pets, 707 Monroe Street, in Nashville's Germantown neighborhood, the event is sponsored in part by Bonaparte's Retreat, the animal rescue organization founded by Emmylou. Other acts performing include Maura O'Connell, the Carter Brothers, Chris Henry and the Treble Hook Trio.

Chuck Wicks is teaming up with NRA Country for a special StageIt concert on April 23 at 7:30 PM ET. The singer-songwriter will perform songs from his new EP, Rough, as well as answer fan questions in a live chat. You can watch online for free, though you're encourage to contribute to the "tip jar," as all proceeds will go to the American Cancer Society. "Cancer has hit home in my family more than once and I'm grateful for the chance to give back to the cause with NRA Country through our StageIt concert," says Chuck.

Sugarland's Kristian Bush, who recently toured overseas, in addition to releasing his first solo single, "Love or Money," has introduced a revamped version of his official website. In addition to photos and music from his two-decade career, the site includes a full discography dating back to 1985. "KristianBush.com 2.0 is a new way to communicate my adventure," says the musician. "It is my story so far ... and the book where I plan to write the story that comes next. Everyone is welcome. I can't wait to see what we build together." [KristianBush.com]

Gloriana performed for troops and their families at Camp Pendleton last week. The country trio visited the Southern California Marine base for an event benefiting the Marine Corps Community Service. [Country Music Is Love]

Don't forget to tune in to "American Idol" tonight (April 11) to see Kelly Clarkson and Scotty McCreery perform on the show that shot them both to superstardom. The show airs at 8:00 PM ET on FOX.