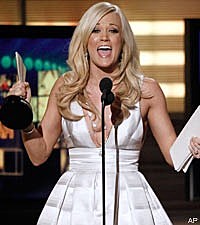 For the second year in a row, Carrie Underwood is the ACM's Entertainer of the Year.

"I think I just got makeup all over Brad Paisley," Carrie said, referring to the big hug she received from her fellow nominee. "Kim [Brad's wife, actress Kimberly Williams-Paisley], it was me. I'm sorry!"

All jokes aside, Carrie exuded gratitude as she continued her acceptance speech. "Thank you guys! Praise the Lord. Thank you Simon Fuller [and] everybody at 19 Entertainment, you guys mean so much to me. Thank you everybody at Arista. Joe [Galante, departing chairman of Sony Music Nashville], we are going to miss you so much ... Everybody that's been with my career from the beginning. Thank you Mike [Fisher, Carrie's fiancé] -- I love you so much. Mom, my sisters, my family, fans -- God bless you so much. Thank you country music. God bless country music!"

The Entertainer category was one of two that were fan-voted at the 2010 ACM Awards. More than half a million people texted in their votes during the live show, with Carrie beating out Taylor Swift, Kenny Chesney, Keith Urban, Brad Paisley, Toby Keith, George Strait and the Zac Brown Band. It was her second win on Sunday's live telecast, as she was also surprised earlier in the evening with the Triple Crown award, given to her for winning Top New Artist, Top Female Vocalist and Entertainer of the Year in years past.

by Rick Diamond/ACMA2010/Getty Images for ACMA

Carrie is the only female artist to ever win the ACM Entertainer of the Year twice and only the seventh female in the history of the awards show to take home the ACM's top honor.

Filed Under: Carrie Underwood
Categories: ACMs
Comments
Leave A Comment
Back To Top