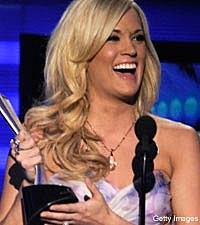 Carrie Underwood sang her new hit single, 'Temporary Home,' to thunderous applause during the 2010 ACM Awards. Following her performance, she was surprised by host Reba McEntire, who handed Carrie an award she didn't even know she was up for.

"There are so many people to thank for the past five years and it all started with fans and country music being so wonderful to me," said a visibly emotional Carrie. "I never could have wished for, asked for, dreamed of more than this, and I thank God for country music. I thank my Lord and Savior Jesus Christ for my family. All the people that I work with, you know who you are. There's not enough time in the day, so thank you to anyone I have met along the way. Thank you. God bless you."

Carrie has five ACM nominations this year, including Entertainer of the Year.

Filed Under: Carrie Underwood
Categories: ACMs
Comments
Leave A Comment
Back To Top