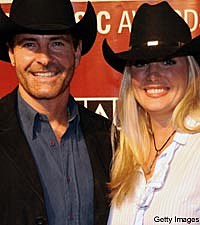 Country's newest duo, Burns & Poe -- former Trick Pony co-founder Keith Burns and singer/ bassist Michelle Poe -- spent Monday (Nov. 16), Keith's birthday, in Texas, filming the music video for 'Cowboy Stomp' - a track which has been designated as the Dallas Cowboys' theme song for the 2009 season. Cowboy Troy (who raps on the tune) and the world-famous Dallas Cowboy Cheerleaders were also on hand for the taping inside the newly-built Cowboys Stadium.

"This was a two-fold event for us," says Keith. "To be invited to the Cowboys Stadium to film their anthem, and to be surrounded by all those beautiful cheerleaders ... on my birthday! I couldn't think of a better way to spend it!"

The video will be broadcast on the stadium's JumboTron, which also happens to be the largest in the world with a screen measuring 180 feet wide and 71 feet tall!

On your (we're assuming) much smaller computer screen at home, you can check out footage from the making of the video on Burns & Poe's official MySpace page.

The duo's latest single, 'Don't Get No Better Than That,' will be followed by their debut album set for be release next spring.