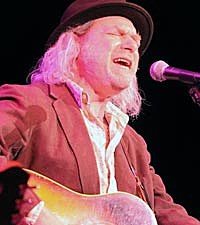 The Country Music Hall of Fame and Museum's Ford Theater is quickly becoming one of the most dependable venues for once-in-a-lifetime musical "events" in Nashville. On Thursday night (August 24), such an event occurred as guitarist/singer/producer/singer/songwriter Buddy Miller took the stage to demonstrate the astounding breadth of his talent, in addition to his dry wit and his obvious gift for choosing his friends wisely.

"Welcome to 'Buddy in Wonderland,' Museum Director Kyle Young said in his opening remarks, noting that in turning over the stage "as Buddy's living room," the program, which began on August 10, marked the re-opening of the museum's 213-seat Ford Theater, which was damaged in the catastrophic flood that hit Nashville in May. In his previous performances, Buddy's guests included Lee Ann Womack, Tom T. Hall, Darrell Scott, Patty Griffin and the McCrary Sisters.

As he, his bass player and percussionist took the stage to get the intimate evening underway, Buddy joked, "It is an honor to be here. I really like to keep expectations low." He then launched into a scorching rendition of 'Does My Ring Burn Your Finger,' a 2000 hit for Lee Ann Womack, setting the tone for the evening. The incendiary theme continued as Buddy introduced 'Gasoline and Matches,' noting, "It's been in a vampire movie, so that gives me something to talk about." The "movie" is actually the dark -- and, yes, truly bloody -- HBO series, 'True Blood.'

"I haven't seen it but I heard it's pretty good," Buddy said. "I don't like the look of it, actually. I heard there was a chick vampire that bit a truck driver when my song came on the radio. It didn't work out for the truck driver ... and I like truck drivers."

Joined by his longtime friend and frequent songwriting partner, Jim Lauderdale, the pair harmonized on the plaintive 'Hold on My Love.' "There's nothing like a Buddy Miller concert,' Jim said before sharing memories of having first met his friend some 30 years ago in New York City where they became part of a burgeoning country-music scene. Jim summed up his pal by saying, "People are afraid to meet their heroes but he's one hero who won't let you down. He's as good as his music is as a person." Sentiment aside, the two then tore into a blistering version of 'Hole in My Head,' a song they co-wrote which was covered by the Dixie Chicks on the 1999 album, 'Fly.' After the song ended, Buddy recalled how Jim called to tell him the Chicks had recorded the song. "I didn't really know who they were," he remembered. "I asked him, 'Is that a good thing?' and he said, 'That's a good thing.'"

The second of the special guests was Shawn Colvin, who had been touring with Buddy, Patty Griffin and Emmylou when he was hospitalized to undergo triple-bypass surgery. Shawn's began with a lovely version of Lefty's Frizzell's 'That's the Way Love Goes,' which was, of course, also a smash hit for Merle Haggard. "Buddy's the reason I moved to New York City," Shawn said before the evening's host introduced their rendition of 'Poison Love' by classic country duo Johnnie and Jack. "Wasn't Johnnie married to Kitty Wells?," Shawn asked. Buddy answered, "She still is, I think." After a beat he wryly added, "I go out of town a lot, though."

Further establishing their connection to the song (which served as the title track to Buddy's 1997 album), Buddy explained that Shawn portrays Kitty Wells in 'Crazy,' a recent bio-pic of guitarist Hank Garland. The pair also performed the Everly Brothers classic 'Let It Be Me,' followed by Richard Thompson's 'Keep Your Distance' and Shawn's own 'Diamond in the Rough.'

Buddy then introduced Emmylou, who, joined by Shawn, offered the emotional highpoint of the evening with a tender version of 'Love and Happiness,' which she said is "a song about having children," something she noted she and Shawn have in common. After her own 'Red Dirt Girl,' Emmylou and Buddy slipped effortlessly into the roles of Dolly Parton and Porter Wagoner for a lively duet of 'Burnin' the Midnight Oil.'

Closing the night on a poignant, though still humorous note, Buddy was joined by Emmylou and Shawn again for 'Heart of Hearts,' explaining that one of the first people to contact him after his heart surgery was the song's writer Stephen Bruton, The man who crafted much of the music for the Oscar-winning film, 'Crazy Heart,' Bruton died in May 2009. Buddy recalled that while in the hospital, he received an e-mail from the singer saying, "Sending good vibes your way." "I was really medicated and I ordered a set of vibes. I ordered kettle drums and a marimba. I canceled those but it was too late for the vibes. I completely forgot about it. I got home and this big truck pulled up ..." he said, to uproarious laughter.

The "musician extraordinaire," as he was introduced, then ended the proceedings with the same intensity as he had begun them, leaving the crowd with the fiery 'Somewhere Trouble Don't Go' and the redemptive 'All My Tears,' written by his wife, Julie Miller.